All posts in Climate

You are here: Home / All posts in Climate
20

Overtourism and the Struggle for Sustainable Tourism Development Sustainability in tourism isn’t just about re-using that hotel towel a second day. It’s thinking deeply about how visitors get in and out of a destination while doing the least harm.

With 2017 being the United Nations’ International Year of Sustainable Tourism for Development, now is as good a time as ever to take stock of the opportunities and challenges faced by tourism providers trying to ensure the long-term sustainability of the industry.

While tourism is important to many local and national economies, overcrowding is changing the perception of the benefits of mass tourism. Spain is a prime example of a country struggling with its popularity.

Barcelona’s relationship with tourism has been shaky for a number of years now. Already in 2014, the documentary “Bye Bye Barcelona” highlighted the negative impact of mass tourism on the city. Locals fear that they will be priced out of the housing market, eventually resulting in Barcelona losing population diversity and character. The local government has stopped issuing licences for new hotels and has banned change-of-use permits required for holiday lets.

Capping tourists is a drastic measure, and surely not something destinations would like to do. It is often seen as a last resort, and the fact that more and more tourist destinations see no other way to remain sustainable and competitive is telling of the apparent failure of other initiatives.

By Wouter Geerts, Euromonitor from Skift

Change what you eat and reduce your carbon emissions There’s no doubt that raising livestock for food requires massive amounts of land, food, energy and water – and it is claimed that these farm animals contribute to at least 50 percent of global greenhouse gas emissions, according to a report published by the Worldwatch Institute.

Is it possible for humans to adjust lifestyles and diets in such a way that these emissions are reduced? Here are some easy options for reducing your meat intake and lowering your culinary carbon footprint.

Removing meat from the daily diet is becoming more popular. The app HappyCow has been developed to make it easy to find vegan and vegetarian restaurants. HappyCow gives you insider tips in over 175 countries. Download the app here.

Make a list of ingredients that you consume on a regular basis. Consider vegetarian alternatives and make a new list. If you enjoy spaghetti or chilli, for example, use a ground-beef alternative from suppliers such as Morningstar Farms and just cook it using your normal recipe and method.

Explain the rationale for your decision to reduce meat consumption and demonstrate practically how alternatives can be equally appetizing. Click here for some nutritious recipes. Surprising Ways Your Vacation Can Impact The Environment What happens on vacation stays on vacation, right? Well, if you’re talking about the impact of your vacation footprint, almost the exact opposite is true. We’ve partnered with Harrah’s Resort SoCal to share some surprising stats about how you’re expending energy on your trips ― and exactly how you can make a difference the next time you travel.

Read more by following this link. By HuffPost Partner Studio.

This Machine Crushes Beer Bottles Into Sand For Beaches

In case you didn’t know, apparently there is a shortage of sand in the world. Since sand is used in a variety of industries, ranging from construction where it is used in mortar, plaster, concrete, asphalt, as well as being used in the pharmaceutical industry, safe to say that it is a very important resource.

This is why over in New Zealand, a report from AdWeek (via Geek) has revealed that a company called DB Breweries has launched an effort to help with the sand shortage. How, you ask? By asking customers to drink more beer, and to put their empty beer bottles through specially-built machines, where those bottles will be crushed into a sand substitute.

Read more on how drinking beer can help the increase of sand. By Tyler Lee 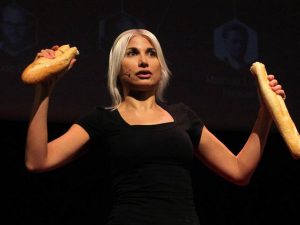 Selina Juul, who moved from Russian to Denmark when she was 13 years old, was shocked by the amount of food available and wasted at supermarkets

Never underestimate the power of one dedicated individual.

A woman has been credited by the Danish Government for single-handedly helping the country reduce its food waste by 25 per cent in just five years.

Selina Juul, who moved from Russian to Denmark when she was 13 years old, was shocked by the amount of food available and wasted at supermarkets.

Read more on how she reduced the waste of food in Denmark. By Zlata Rodionova.

The United Nations 70th General Assembly has designated 2017 as the International Year of Sustainable Tourism for Development.

To that end, please explore the official IY2017 website at www.tourism4development2017.org, which is their primary tool for coordinating the worldwide celebrations of the year, and on which more than 200 events and activities have already been registered. The UNWTO kindly invites you to upload your IY2017-related initiatives, as well as to share your best practices, stories and/or knowledge. Your initiatives will be visible on the website’s calendar and global map, and you will be able to use the IY2017 logo in all your communications. Kindly note that all the information they receive will be included in their final report to the UN General Assembly in 2018.

Furthermore, UNWTO is organizing a series of events and activities, the details of which you can find in the attached document. For instance, they are running a consumer-oriented awareness-raising campaign “Travel.Enjoy.Respect.” with six useful tips for responsible travel, and would very much like you to help disseminate it as broadly as possible. In addition, UNWTO is organizing 14 IY2017 Official Events, as well as producing two flagship reports related to the themes and objectives of the IY2017, for which your support and input would be more than welcome and on which more info will follow shortly. As part of their awareness-raising activities, they have also initiated a Special Ambassadors programme, currently comprising seven high-profile individuals who will help spread the relevant messages regarding tourism as an agent for positive change.

On the occasion of World Wetlands Day on February 2, IUCN is announcing the launch of a regional project to enhance the resilience of wetlands in Lower Mekong countries. Funded by the International Climate Initiative (IKI) of the German Federal Ministry for the Environment, Nature Conservation, Building and Nuclear Safety (BMUB), and to be implemented until 2020, the “Mekong WET: Building Resilience of Wetlands in the Lower Mekong Region” project aims to build climate resilience by harnessing the benefits of wetlands in Cambodia, Lao PDR, Thailand, and Viet Nam. Mekong WET will help the four countries to address their commitments to the Ramsar Convention, an international treaty for the conservation and sustainable use of wetlands, and to achieve the Aichi Biodiversity Targets. With wetlands featured as a key ecosystem, the project also supports governments in implementing their National Biodiversity Strategies and Action Plans (NBSAPs) under the Convention on Biological Diversity and pursuing their commitments on climate change adaptation and mitigation under the United Nations Framework Convention on Climate Change. By International Union for Conservation of Nature (IUCN). Read more.

The Social Cost of Carbon EPA and other federal agencies use estimates of the social cost of carbon (SC-CO2) to value the climate impacts of rulemakings. The SC-CO2 is a measure, in dollars, of the long-term damage done by a ton of carbon dioxide (CO2) emissions in a given year.  This dollar figure also represents the value of damages avoided for a small emission reduction (i.e., the benefit of a CO2 reduction). By U.S. Environmental Protection Agency (EPA).  Read more.

Why planting more trees is one of the best things a hot, polluted city can do

Categories: Climate, Flora, Planet, Recommended Reading
Tags: Environment, Green, Pollution, trees
Comments Off on Why planting more trees is one of the best things a hot, polluted city can do Trees can make a city sidewalk prettier, sure. But that’s not even their best trick. A growing pile of research suggests that planting more urban trees, if done right, could save tens of thousands of lives around the world each year — by soaking up pollution and cooling down deadly heat waves. By Brad Plumer |@bradplumer | [email protected] | Read more. According to a new global analysis published in the journal Science Advances this month, water shortage is one of the biggest challenges facing humanity today.

The results are fascinating and the causes are clear. Continuing population growth coupled with increasing food demand is stretching water limits around the world.

It was also interesting how rising incomes have been leading to a change in diets where people are tending to eat meat more regularly.

To read more on this article published in The Guardian Environment Section click here.